As you might have guessed, should you be a frequent or daily reader of the Jewish Single Malt Whisky Society blog, I get a good deal of whisky samples; buy more whisk(e)y than I should of whisky and yes; I taste, review and drink a lot of whisky.

You might wonder what happens to the drips and dregs left over from sample and purchased bottles; the stuff left over that’s too little an amount to drink…  What happens?

I used a base whisky to start the whole thing (about 15% of the Suntory Hibiki 12yo) then dumped 21+ dregs of various whiskies into the bottle and “wham-bam-thank-you-shmuel” the final result is a tasty little dregs bottle of whisk(e)y I call: The GlenHatton.

So, what to do with all of this dregs blended-whisk(e)y??

Well, if you’re me, you send a message out to friends via the Jewish Single Malt Whisky Society Facebook page asking if anyone wants to get a taste of the stuff.  I had enough for 8 samples and got a taker for each one!  Based on the quick response and people’s seemingly burning desire to taste the stuff, I thought it’d make for a great post!

What would people think of it and what did they think might be in it?  With the exception of the Malt Impostors, no one knew that the dregs sat in a Hibiki bottle.  And, with the exception of a few other things, none of which had to do with the make up of this whisky, this is all I told people about the whisk(e)y:

You are one of eight people to join the GlenHatton inner circle.  Congratulations.

It took me a long time but I finally filled (for the most part) a full bottle with the dregs of whiskies from many, many different samples & countries.  There are over 26 different whiskies in here from all over the world: Scotland, Japan, Sweden, USA & Taiwan!

I’d say more than 95% of this is malt whisky but there is some grain (in the form of bourbon & and grain content from a blend or two I dumped in there).

Rule # 2 — Enjoy.  It’s an odd duck.  I didn’t go about creating this dregs fluid in the attempt to design some master blend.  No, this is all random stuff.  Solid!

Rule # 3 — Aside from enjoying it, try to taste it as if you were reviewing it as best you can and PLEASE, write down your notes.  I’d love to get the standard Nose, Palate, Finish notes.

Additionally, when I do post this up, I will reveal the contents of this dregs sample.  Go ahead and try to take some guesses as to what you think may be in there (you don’t have to try and guess all 26+ whiskies).  The person (or people) who get more than 7 correct will get a surprise whisky sample.

Hmmm, 7 may be a high number.  Ok, the person who gets the most correct will get a surprise sample.  Sound cool?  Cool.

Thanks again for your participation!

So, what’s in The GlenHatton?  A LOT! In no particular order and in no specified amount, the whiskies are:

So, who are the participants in this grand experiment and what did people think of the GlenHatton?  Well, here are the first 4 reviews: 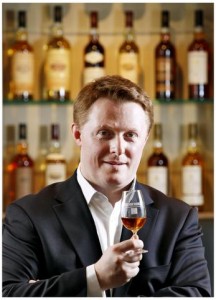 Initial impression on the nose: subtle, mild and well balanced with plenty of tropical fruit – bananas and pineapple. Strangely reminiscent of Hibiki 12yr!

Tasting with water: Soft, easy drinking with vanilla, honey and tropical fruits. Later, hints of American whiskey on the breath.

My guess for (some of) the whisk(e)y components:

Since blends should be all about balance and ease of drinking I think you really hit a home run. Very drinkable!

Bio: Born and raised in Burns country (Ayrshire, Scotland), I have lived in the US since December 2001. I founded the Single Malt Whisky Society of the Palouse in 2004 in order to share my love of single malt with friends who were interested in learning more about the hallowed spirit and we’re still going strong. I also lead private whisky tours of Scotland and would love to show you around my native country.

Nose: Fruity to begin (more like artificial fruit flavoring, though, with a sherry nudge coming in from behind), developing black pepper and soft, fragrant spice (a red spice like paprika comes to mind), overripe bananas poke around the edges of the spice (reminiscent of an Indian bazaar).
Palate: More of that soft spice with building wood (makes me think about dark chocolate with dried chili peppers), chewy with long toffee notes, some spicy ginger followed by thick, woody, cumin notes, red fruits in a summer crumble.
Finish: Lots of black pepper and charred wood with ground cumin that just keeps going and going and going.
Overall: Given Joshua’s fascination with Glenmorangie this is likely 25 different expressions from Glenmo and one Japanese blend!  With that said, however, I’m thinking there has to be some Amrut in here.  I’m also getting elements from port finishing with the red fruits on the palate, so maybe there’s Kavalan ‘Concert Master’ in here, and maybe some Balvenie and Springbank Port finished dregs, too.  Could I be tasting Mizunara (Japanese oak) in here?  That always throws me for a loop… Hibiki for sure.  He has very international tastes, you know!  Needless to say, very interesting stuff (although I think I’ll still be tasting cumin a week from now).

Bio: I am a native resident of Brooklyn, NY. I have done freelance sales/marketing for some high end single malt scotch brands in the NY Metro Area, and now also work for Christie’s as a Wine Inventory Controller. I have a huge penchant for reading, working out and all sorts of geeky, nerdy things but adore spirits, especially scotch.

All in all a pretty good dram. Surely opens up a bit with just a slight splash of water. Review was done utilizing a 2 oz pour. Was tempted to try this alongside a nice glass of Guinness and a medium bodied cigar, but I’ll save that for the next dram, hahaah.

Bio: Foreign Secretary of Aberdeen University Whisky Society, currently residing in Barcelona. Just returned on Monday from Judging at The International Whisky Competition in Chicago – of heated discussion. Assisted at Taipei Whisky Live last year and many other whisky related events. Works as Online Community Manager for a Webinar Company in Barcelona.

Disclaimer from Blair: Sorry I’ve got a bit of a lingering cold – think its the sudden change in temp here in BCN – anyway, I’ve given it my best shot! This is all from my right nostril 🙂

Palate:  Vanilla and creamy texture at first. Then quite a sharp sweetness of sherbet lemons and a bit of turkish delight. High amounts of ground black pepper.

Finish:  Fairly long finish with Parma-Violets (if you know what they are!) and the pepperiness and cured meats linger with a hint of cigar smoke.

David Blackmore, you nailed it when you detected the Hibiki but as you saw from the list, that’s the only whisk(e)y from your list in there.  However, your detection of the tropical fruits (pineapple, banana & mango) speaks to the amount of 1991 Balblair that’s in the GlenHatton – You’ve got a killer nose!

Jason, you are correct.  I LOVE, and am a proselytizer of, Glenmorangie (music to Mr. Blackmore’s ears, I’m sure!) and Japanese whiskies however you’ll notice there’s not one drop of Glenmo in there and only one Japanese whisky in there (the Hibiki, just as David Blackmore had detected).  You nailed the Balvenie and the fact that there was something influenced by port in thee – the SMWS 123.5 is an 8yo Glengoyne from a port pipe.

David Bailey, your notes made me hungry as hell!  I think you nailed it when you detected the toffee on the palate (that was one of notes my tongue and brain held on to).

Blair, sorry that your nose was all jacked up for the nosing & tasting of the GlenHatton.  Your notes are most interesting and upon a 2nd review of the GlenHatton I can see what you mean by the pepperiness to the whisk(e)y as well as the over-ripened peach notes and cigar smoke (delicious cigar smoke indeed!).

David, Jason, David & Blair – thanks so much for participating and for your great tasting notes.  So far Jason is in the lead with the most number of whiskies guessed.

Check in tomorrow as we’ll see notes from 5 other people (including my own) and the big winner of the surprise sample will be announced.