I was recently given the opportunity to attend a truly gala event – The 17th Annual Single Malt and Scotch Whisky Extravaganza (say that 3 times real fast.  Actually, that’s too easy.  Try saying it 17 times, real fast).

So, what is this Extravaganza?  It’s a big whisky tasting event hosted by the Scotch Malt Whisky Society of America.  Like other whisky events, you have the chance to taste hundreds of different whiskies.  Unlike other whisky events, this is the only large event (or series of large events as this does travel from city to city; see below) in the US where one has an opportunity to taste SMWS whiskies even if you’re not a member of the Scotch Malt Whisky Society.

Additionally, this event features a great forum (or panel) prior to the event.  Here is how the Extravanzites describe the forum: “The Whisky Panel is a one hour symposium prior to each Extravaganza event that is composed of brand ambassadors, distillery representatives and on special occasion, the master distiller from participating brands.

The purpose of The Whisky Panel is to allow attendees to interact and ask panel members questions to gain knowledge about individual brands, whisky production and other topics relating to the “whisky world”.” 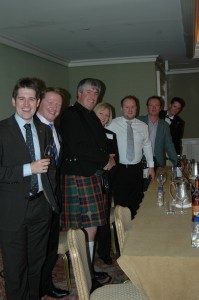 The panel for the night (as shown on the right) consisted of Andrew Weir from The Balvenie, David Blackmore from Glenmorangie/Ardbeg, Simon Brooking (Laphroaig) as well as, and to stop name-dropping, fantastic Brand Ambassadors from Diageo, Dalmore/Jura, The Glenrothes and The Glenlivet.

Many questions were asked.  Lots of great information was imparted and laughs were had.  It was a fun hour long chance to learn more about whisky and get to know the Brand Ambassadors a bit.

Oh, there were many-many other highlights from the evening.  Let’s list them out, shall we?

The size – not too big, not too small.  Though busy, it was completely manageable and you have enough time to taste as much as you want.  I think, however, that they may have gotten more people than they expected at this event because they started running out of food quicker than they had expected.

Then there was all of the whisky expressions that stood out for me (in no particular order):

One main reason for me to join the event, other than for the whiskies, was to talk with some people I’ve been wanting to meet with for some time as well as catch up with old friends and new ones.

I had an opportunity to sit, eat and talk with David Blackmore (Glenmorangie & Ardbeg).  All around good guy funny as all hell, and quite the ham (see left).  For you kosher keeping Jews out there in whisky land, David is the man who pushed for the OU kosher certification of the Glenmorangie Original, Astar and the Ardbeg 10yr.  A good man indeed. 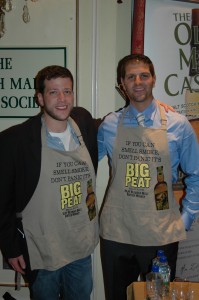 I also had the opportunity to talk with Aron Silverman of the SMWSA.  Aron and I chat quite a bit and it was nice to finally meet him in person (pictured left, he’s on the right and for some reason this apron makes me, situated on the left, look about 150 pounds heavier.  Oy.).

I had a brief chat with Simon Brooking of Laphroaig (see right).  I wish I could have talked with him more but his table was, to put it lightly, mobbed.

I also got to meet Alan Shayne (President of the SMWSA who I interviewed here), his daughter Gabby and his business partner, Jerry Zimmerman.  All three were as charming as could be and Jerry was one funny guy!

The list of people I met with and spoke to could go on and on but putting them all down here would make for a very longwinded post (wait, can’t forget to mention Mike Walsh – good to meet you!). 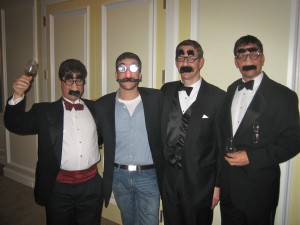 Rather, let me skip to the final group of people I had a chance to meet – none other than everybody’s favorite whisky slugging Groucho Marx impersonators, The Malt Impostors (pictured left, I’m the one with the blazing bug eyes).  What a group of guys!

I LOVE geeking out about whisky and geeking out with them was a joy.  Also, they’re just funny as all shit.  I could have talked with them for the entire evening if it weren’t for those meddling kids (and my 2.5 hour ride long home)!

I am really looking forward to the Extravaganza next year and wish I had the opportunity to make it to some of the other events this fall and winter around the US.

While I did get a comp ticket (special thanks to the SMWS) to cover the event, the price tag ($120 – $135 per person) for the Extravaganza is such a steal!  If I went to a bar to taste all I tasted here, my bill would have been more like $500 (not including food).  Also, there were whiskies here you’d rarely have the chance to taste anywhere else.  On top of this, that forum (or Whisky Panel) prior to the event was just fantastic.

So, below is a list of other Extravaganzas.  I hope there is one in your area so you have a chance to enjoy this shin-dig as well. 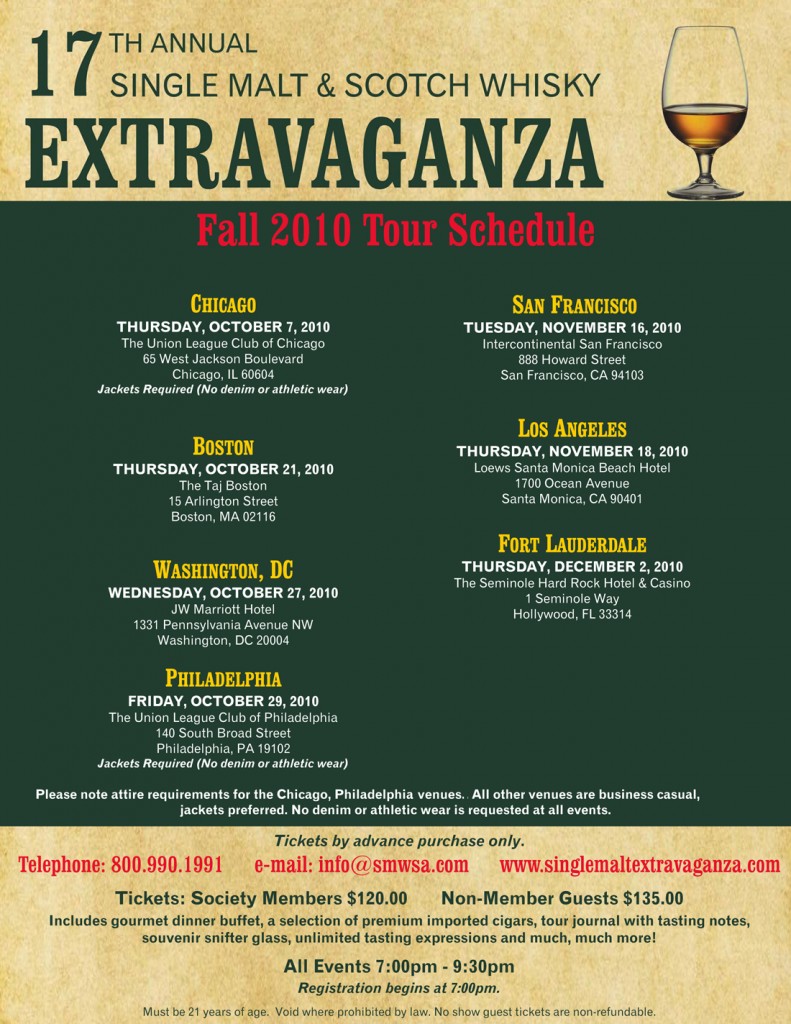 For more information on the SMWS events and on how to purchase your tickets, click here.