Yet another Arran whisky tasting, this time hosted by The Jewish Single Malt Whisky Society in Guilford, Connecticut:

Whiskies, six in all, to be tasted are:

Plus one Arran whisky that even we at the society don’t know the details of!

Full details listed below.  If you have interest in joining us, please email Joshua by Friday, May 6th: jewmalt@yahoo.com

If you’re in the NYC area, are looking for an AMAZING kosher restaurant AND want it paired with some of Scotland’s finest whiskies… this event is for you:

Andrew Hogan is the enthusiastic and knowledgeable Brand ambassador for the Arran Single Malt in the USA. He has 20 years experience in the drinks industry and has a wealth of experience in matching whiskies with the best local cuisine.

Andrew is also quite an entertainer, and dinners are usually laced with stories and experiences from the industry, and the characters that work with Scotch whisky round the World. 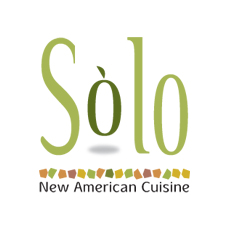 Come along and try four different single malts from Isle of Arran Distillers – each one matched with a different dish – and enjoy the craick! Good food, fine whiskies and the company of friends…what could be better!

Enjoy a 4-course meal paired to perfection with:

‘Twas the night before WhiskyFest and all through the land, a lot of whisky was sipped on, especially Arran (yes, I know it doesn’t really rhyme).

Busy, busy, busy.  Here I was, the evening before WhiskyFest and I had a big whisky pouring event I was doing for the Kosher Wine Society.  Whiskies poured that night were: Glenmorangie Original, Usquaebach Reserve Premium, Usquaebach 15 Year Old, Usquaebach ‘Old-Rare’ and the new Arran 14yr.  The event was at Solo on Madison Ave – an amazing Glatt Kosher restaurant, BTW.

Put quickly & simply, I was honored to have been asked to speak at the event.  A big thanks to Aron Ritter of the Kosher Wine Society for asking me to speak.

Prior to this, I met up with Andy Hogan of Arran Distillery and we shared a few beers at St. Andrews.  Just as we ordered our little snickety-snacks, John Hansell of Malt Advocate, and shortly after that Richard “The Nose” Paterson of Whyte & Mackay, (with his freshly shaved mustache) walked in. 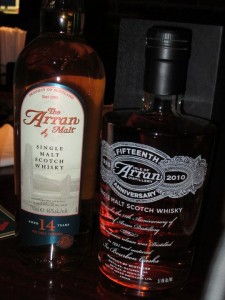 I met up with Andy for a few reasons:

B) I asked him if he’d join us at our dinner with the Kosher Wine Society and he jumped at the chance.

C) Andy had some Arran 14yr for me to pour at the dinner and, for my own personal consumption, a bottle of the Arran 15yr Open Day, Distillery Only whisky!  Wham-bam-thank-you-Andy!

While talking with John Hansell, he eyed the two Arran beauties and remarked that he’s never had the Open Day bottling (not many people had — only 600 bottles ever produced).  Being the nice guy that I am, I took a running jump at a chance to share my Arran with someone such as Mr. Hansell.  He graciously jumped at the chance to taste the stuff 🙂

Andy did a fine job talking about both the 14yr and 15yr Arran whiskies.  Both are super fine drams (as pointed out by all of us at the table – tasting notes to come in a couple fo weeks).

After this private tasting, Andy and I headed off to Solo for the whisky pairing event.  While there, we met up with many, many good people including Noah Goldstein of Usquaebach and Aron Ritter, President of the Kosher Wine Society.  It was a pleasure to be a part of the event.  Again, thanks Aron!

So there we were, Andy Hogan & Joshua Hatton, bellies full of food & whisky — what to do next?  Well, head over to Ward III to meet Parker Beam and taste his new Evan Williams 2001 Single Barrel whiskey!  Sadly, we were too late and missed that event completely.  We did, however, get to meet up with Greenie D McGee (World traveler, prankster…Ladies’ man!).

Let’s fast forward about 20 hours into the future to the evening of WhiskyFest.

The folks at Malt Advocate were nice enough to comp a press pass for me to join the festivities (thank you again!).  Sadly, this detail did not make it to the press-pass list and with the place so packed, I had a bit of a fight to get the folks in charge of the passes to let me in.  Thankfully, Amy Westlake (John Hansell’s wife and basically the person in command of the event) was passing by and she vouched for me.  Thanks Amy!

Into WhiskyFest I went – Glencairn in hand and ready to sip on some VIP hour whisky goodness!  First stop — Arran.  I had to try some of the new Machrie Moor PEATED Arran.  A cask strength beauty which was lightly peated and complimented the Arran spirit so well.  Andy had a bottle in hand and was at the ready to pour.  Watch out!  Peated Arran, coming your way!

Stop number 2 – Compass Box to taste the new 10th Anniversary dram – The Flaming Heart.  People who say they do not like blends will miss out on the specialness that is Compass Box.  Robin Robinson, Compass Box Ambassador and all around nice guy, poured an ample sample for me.  I was happy.

Where to next? Angel’s Envy to finally meet Wes Henderson (who I recently interviewed here) and his dad, Lincoln Henderson, the artist who designed the new Angel’s Envy Bourbon (review of that whiskey here).

I’ve been in contact with Wes for sometime now and have heard from him bits and pieces of the many issues that present themselves when you go about releasing new whiskies.  It’s a tough process, no doubt.  So, as a way of saying “congrats” on the pending launch of Angel’s Envy, I presented Wes with his very own Jewish Single Malt Whisky Society (Honorary Whisky Heeb) T-Shirt.

After this, I hoped from table to table seeing what else there was to see/taste.

I made a point to stop at the Amrut table to meet Raj.  Raj, of Purple Valley Importers fame, was the person kind enough to send me samples of the Amrut line for review.  I had to say hello, say thank you and taste some of the limited Amrut Intermediate Sherry expression.  The Intermediate Sherry whisky was a big spicy dram though easily tamed with a dash of water.  I’ve got a sample on it’s way to me for a formal review.  Expect to see my tasting notes soon.

Other whiskies of note – Dry Fly 100% Wheat whiskey out of Washington state.  Duncan Taylor 12yr peated Bunnahabhain (one of my faves of the evening), Springbank CV, Longrow CV, Yamazaki 1984 (at $600/bottle, it was nice to have a chance to taste this nectar), Stranahan’s Colorado “Snowflake” triple wood whiskey and Glenrothes 1975 vintage.

Lots of whiskies were missed — with more than 300 whiskies on hand to taste, it’s to be expected.

I did get to try the new Black Grouse – a solid blend folks!  While at the Grouse table, I met up with Dan Friedman of The Jewish Daily Forward and we got a chance to talk about whisky.  And actually, Dan was nice enough to lay down some of our conversation here.

All of the seminars looked great to me but I was only able to attend one – Suntory’s seminar with their Master Distiller, Mike Miyamoto.  Mike did a great job taking us through the Yamazaki & Hibiki line as well as give a good history of the Suntory owned Japanese distilleries.  We learned quite a bit about the importance of oak on their whiskies; not just type of oak (American, European & Japanese) but type of cask used.  It was all very interesting.  Mike is a VERY serious guy and extremely passionate about his whiskies.  It was great to see him sip on the stuff and start spouting out tasting notes.  Eyes closed, mind working, taste buds tasting.

Earlier in the evening, when I was at the Angel’s Envy table, I missed an opportunity to meet/talk with Lincoln Henderson (creator of Woodford Reserve Bourbon and now, Angel’s Envy) so I rushed back to see if he was there.  Luckily for me, he was.  What a charming guy!  I had a nice quick conversation with him but, had I the chance, I would have loved to talk with him longer – with over 40yrs in the business, he’s got to have some AMAZING stories!

So, this brings us to the end of my experience.  A complete whirlwind tour of the event.  Almost overwhelming.  Actually, it was overwhelming.  I could envision this being a fantastic two day event (hint, hint, nudge, nudge).

I’ve heard complaints recently of the cost of a ticket — $120 (regular admission) $160 (VIP admission).  The VIP hour alone is worth the cash.  First off, most of these whiskies are hard to find in one place and, if you did find them, you’d pay double or triple that (at least) to taste them all.  Plus, the food is spectacular.  Great seminars to attend, etc…

If it comes close to where you are, do not miss this next year.  And, if you do go – make sure you come prepared.  Like having a birthing plan for when a woman goes into labor, I’d suggest you come to one of these events with a clear cut agenda.  What do you need to discover, who do you need to talk to, what seminars are available, etc…  Map it all out and STICK TO THAT PLAN.  I would have done that but I left my plan at home.  Oy.

How to launch The Arran Malt 14 Years Old (both historically and, in style!):

1. Duty pay a 25 litre cask and remove it from the warehouse of the Isle of Arran Distillery

2. Transport the cask by boat from Lochranza to Glasgow (on rough seas of course!)

4. Open the cask in the Oran Mor Whisky Bar at 6.30pm after being piped round the bar

5. Serve free drams to 200 thirsty fans of The Arran Malt