The following story is based on a true story of theft and its bittersweet consequences.  To protect the innocent (and the not so innocent) the names have been changed.  In the golden age of steam many distilleries employed puggies to transport goods to and from the railway stations.  Barleybree distillery, away in the Highlands, in Glen Close, by the turbulent River Spate, was such a place.

Meet the cast of this shaggy dog tale…

Rosy Bottom… Pat’s wife and the but of many a joke.

Black Rob Steel… Eric’s brother who bathed annually whether he needed to or not! His aversion to soap and hot water made him smell like a very ripe kipper and it was a mistake to get downwind of Black Bob on a hot day.

Pundy Joe Plillpots… Congenital thief and liar and general dogsbody.  He had no redeeming features whatsoever.  Joe was given the nickname Pundy due to his passion for fermented wash,a heady cocktail of  high alcohol green beer,yeast and huge populations of bacteria.  Consumption of this liquid timebomb dissolved the kidneys and liver, adled the brain and earned it’s title of District Nurse because of its immediate explosive effect on the digestive tract.

The Dog… a few introductory pointers.

Let the story begin with a background to Ceasar and his habits.

Caesar was a cross between Tyrannosaurus rex and a wolfhound and had some interesting traits which included chasing postmen and destroying furniture.  The latter led to him being barred from the house by the Bottoms.  Deprived of his house wrecking hobby, Caesar turned his attention to the village postman; in particular, to the seat of his pants.

His method of pursuit was to lurk behind his huge kennel awaiting the arrival of the reluctant postie who would run up the garden path, despatch the mail through the letterbox and sprint back to the safety of the gate as fast as his little legs could carry him.  Caesar learned to strike when the iron was hot and shot forth like a canine cannonball after the fleeing prey.  His attempt at escape was to no avail and Pat rescued him from further persecution when he pulled the monster off the trembling postman to reveal his nether extremities to the world.  The brute spat out the piece of trouser seat and glowed with satisfaction.

The distraught postman resigned his post and returned his uniform, at least what was left of it, to the postmistress Miss Penny Black.

Pat made for his workshop and began to construct a large ‘BEWARE OF FIERCE PSYCHOPATHIC HOUND’ sign to erect in the garden.  Unfortunately Pat had broken his own golden rule and had left the front door open.  This did not go unmissed by the cunning beast and he swept through the living room like a tremendous hurricane destroying all in his path and reducing everything in his wake to matchsticks and mayhem.  On entering their lounge, the couple were met by a scene of devastation and carnage.

In the centre of the room, wagging his huge tail in triumph lay Caesar, stretched out on a carpet of debris that, until recently, had served as their comfortable sofa.

The bereft Bottoms decided that in order to soothe the savage Beast of Barleybree (and to tire it out) Rosy should take the Hound of the Baskervilles for long walks in the surrounding countryside.  Caesar took to these extended wanderings like a duck to water and even barked at Rosy to take him along.

One day Rosy and that reformed dog were walking in the valley beside the track of the puggy (train) line.  As they rounded a bend in the woods, Rosy spotted the last wagon entering the tunnel and she was surpised to note that there was no sign of the puggy (train) coming out of the other side when her and the dog drew level with the tunnel exit.  She decided to investigate and they hid away in the bracken.

After some time, a furtive fetid ragamuffin of a man, who she recognised as Pundy Phillpots, appeared with a bucket full of brown liquid and secreted it in the nearby trees to be collected much later, under cover of darkness. Meanwhile, deep within the tunnel, the Steel brothers had driven a spile into the cask they had drilled, and were replacing the hoop. Secreting the cooper’s tools in a recess in the wall they joined their smelly partner in crime and the puggy continued it’s onward journey at full throttle to make up” lost” time.

Rosy sped home and alerted her husband who immediately informed Roger the surveyor and they agreed that their patience would be rewarded with a red handed capture of the culprits.

A small posse of railwaymen and customs officers were rounded up and an early morning meeting at the tunnel arranged for the following day.  The posse duly met and hid behind bushes and in the branches of trees, out of sight of the approaching puggy and its motley crew.

When the pirates of Puggystop had been inside the tunnel (for what was estimated to be enough time to rob and plunder) the plan of capture began and the trap was set.

The gang of 3 became aware of a strange sound in the tunnel and peered into the darkness.  To their horror they saw a terrible apparition, coming towards them in the gloom.  An enormous hound from hell, hackles raised and pointy teeth bared in a snarl with eyes that burned through them like coals.

“Give yourselves up or I let him off his lead” shouted Pat.

The trio of thieves turned and fled towards the other opening but were easily apprehended by the rest of the posse, who tied them up and threw them into the wagon.  The hero of the hour took his rightful place of honour alongside the railwayman driver, firmly fixing his four furry feet on the footplate and the Puggy headed for the station where Rusty and Ivor waited on the platform.

They would serve the gang with their just Desserts.

EVERY DOG HAS IT’S DAY

A big thanks goes out to Bill Morgan for submitting this story.  All of his entries/stories can be found here. 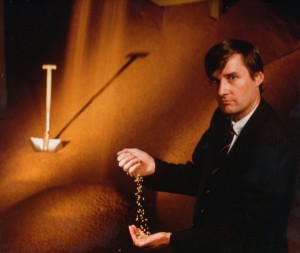