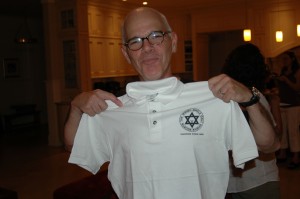 Ralph Erenzo, co-founder of Tuthilltown Distillery (makers of Hudson New York Whiskeys) was in a car accident on Dec 21st.  As of today, December 26th, he’s still in the hospital and remains in critical condition.

Please take a moment to send him and his family some words of support and healing at http://rjerenzo.wikispaces.com/. If you have a blog or Twitter account, please post this as well.

Below is the latest update (but be sure to keep checking http://rjerenzo.wikispaces.com/ for all updates!!

Everything is pretty much the same as Gable’s last update. He is off the blood pressure meds, but back on the Ativan. He’s still very bloated but his color is good. Robert, the nurse who is on right now, has been super negative overall. He told me he is a pessimist by nature. But he seemed hopeful just now. He got him to open his eyes again. It was only for a second and I don’t think he’s conscious, but it was something. They seem confident that his brain is okay.

His heart rate is down to around 100, which is really good. Cathy and I stood and stroked his hand for a few minutes just now, and, during that time, we saw it momentarily dip into the nineties. We are great healers!

We’ve hung a photo of him and Tony next to his bed as well as a picture of the whole Tuthilltown staff.

At Tony’s request, I put on Dave Brubeck Quartet’s Time Out album for him when we left the room.

My mom hasn’t left the hospital since Thursday morning. I’m trying to get her to use this moment of relative stability to go to the hotel and wash up, get some air, etc.

Thanks for all the messages that people are leaving here. We have been reading them to each other and will read them to Ralph as well.

Just out of a meeting with the doctor. Dad is now off of the blood pressure medication and is maintaining an acceptable NBP on his own. This is a first, so obviously a step in the right direction. Oxygen is down to 45%, which they tell us is status quo/stabilized for a patient with this type of chest injury. They took him off of the sedative (ativan) last night and today he was showing signs of response. I stood by as the nurse shouted at Dad “hey buddy, OPEN YOUR EYES!”. A slight eyelid movement was enough to make me laugh with excitement, amazing.

In spite of all the improvements, Dad is “septic” (sepsis). This is a result of the perforated esophagus and the stomach fluids released into the body, creating a systemic infection that is VERY dangerous, especially in his condition. Over the next 72 hours the sepsis is the biggest concern, barring any unexpected setbacks…which the doctor is perpetually preparing us for.

The Doctors are extremely guarded with their optimism, leaving us grasping for any sign of hope in their words. The chorus line repeats “he is still a very sick man, in VERY critical condition”, but today is a good day.