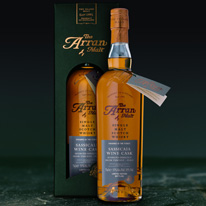 It’s been a while since I’ve reviewed and Arran (and G-d knows, I’ve reviewed quite a few Arran whiskies).  I’ve had a bottle of this Arran Sassacaia on my  shelf for a while and have been slowly, but surely, chipping away at it.

The first time I tried it was when I was in Scotland doing the JSMWS whisky tour with Jason Johnstone-Yellin and our two guests Meg & Mike.  Mike was the one that turned Jason onto the stuff and it was he, Mike, that turned me onto the stuff during a stop at the Craigellachie Hotel just outside of Elgin.

We put this Sassacaia cask whisky up against another distiller’s Sassacaia cask whisky and this Arran one blew the other one out of the water.  There was no real comparison.  This Arran is big and fresh and vibrant.  The other?  Not so much.  While I will not name the other whisky, I will tell you it was *not* the new Glenmorangie Artien – that whisky wasn’t even released when we did this side-by-side.

Here are the details on the Arran Sassacaia  Cask:

On the nose –  Like bathing your nose in a tub full of deep/dark tropical fruits (think passion fruit, persimmon, over-ripe cantaloupe and then a good bit of cherry which I know is not really tropical…).

A bit of a malty backbone.

Juicy juice grape juice (if there were a not so sugary version of it).

Some notes of rubber birthday ballons too.  That’s said in a very positive way.

On the mouth – Thick, deep and honied mouthfeel.

Noticeable notes of, you guessed, Sassicaia wine – cherries, cedar wood and even a bit of chocolate in there.

A couple of sips later reveals an interesting hint (a tiny hint) of swimming pools on hot summer days.

Finish – Drying, long and filled with cherries and chewing tobacco.

In sum – Not a very Arran, Arran if you ask me.  Nice, well balanced and overall a very satisfying whisky.  However, I did not detect much of the Arran character that made me fall in love with their whiskies.  Not a complaint… it just makes me think about what percentage influence wood *really* has on whisky and what makes that percentage change from cask to cask.  This aside, when should you enjoy this one?  Well, I’d try to do it soon.  These bottles are hard to find!!