Did you know that all of us Jews know one another?  Oh sure, it’s mostly true!  And if we don’t know them, we came pick them out of a crowd – I call it “Jewdar”.  “Jewdar” is a radar for Jews just as Gaydar is a radar for Gay folk.

Ok, I’m really just kidding.  It is true, however, that Gal Granov from Whisky Israel and I do know each other.  He and I are good whisky buddies (even though we’re thousands of miles away from one another).  Gal and I started doing some whisk(e)y sample trading and on our last trade we thought it’d be a good idea if we each sent over a “Mystery Dram”.

A dram that A) didn’t cost a whole lot of money and B) is something that neither of us have had before.  The idea is to try and figure out, at the very least, who distilled the mystery dram in question.  No hints, no nothing.  We had to uncover the mystery using only two tools – our nose and tongue.

As you can see below, we tried to make this as mysterious as possible (you’ll note that the Glencairn shown below has a Glenmorangie logo on it.  This is not giving away and hints.  It’s not a Glenmo.  I just love Glenmorangie whiskies so much, I had to have my very own Glenmorangie Glencairn glass.  Seriously.): 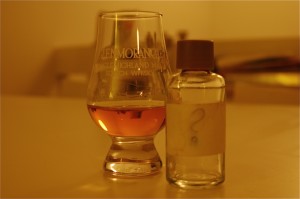 On the nose — A very floral nose, house-planty if you will… Soapy scents and some orange, perhaps a little strawberry too.  There’s a nice little peat backbone here but it’s not overwhelming by any means…  Some curried tomatoes (man… now I want some Indian food!).

Well, I already have an inkling as to what it is but I may want a to chose a Life Line before I blurt out my answer, I better taste it…

On the mouth — The peat is much larger here and it’s a bit dirty.  The mouth feel is quite nice.  Oily, just as I like it.  Sweet.  Simple syrup, salty, green tea… I’m not sure of the ABV but, the attack is not huge here so I’m guessing 43%.

Finish — Sort of a short and thin finish with some orange soapiness coming back.

In sum — Well, my guess on this (which is mostly based on the nose with some of the palate elements to help me fill in the some of the clues) is that this is a Bowmore.  It’s not the 12.  This I know.  But it’s got to be a Bowmore.

I liked it but didn’t love it.  This, to me, is the type of whisky that I’d keep on my shelf (and yes, I’d like to have a bottle of this on my shelf – at all times really) for those moments when you just didn’t know what to pour.  “It’s just a Thursday night so, I’m not going to pour my Glenmorangie Quarter Century” or, “It’s way too hot out, there’s no way I’m breaking out my Lagavulin 16yr DE”, etc…  This is that whisky that can always fill the void.  You don’t need to decide to grab it.  You just grab, open, pour, sniff, sip, swallow, repeat.

I did contact Gal to see if I was right about it being a Bowmore.  Lo and behold, I was right (Woo Hoo!!).  So, which one is it?

You should check and see how Gal fared with the mystery dram I sent him – here’s the link.