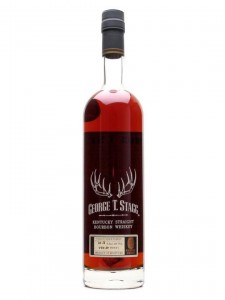 There’s an old saying I once heard…  a saying that has stuck with me throughout most of my young adult and current years.  We all have these, right?  A saying or phrase; something that, in certain situations just comes to you right off the bat because when you first heard it, it struck a chord.  These sayings become a part of you for good or for ill.  That’s just how it is.

When I first sipped this bourbon, at 70.9% alcohol, without water, all I could say… all that would come forth from my mouth was:

“That’s hotter than a whore in heat!!”

And Man-o-Maneschewitz, if this stuff did not burn the top layer of skin off of the roof of my mouth – Whooo-eeee!

A quick summary as to what it was like without water (then I will continue my review with the addition of water, trying to bring it down to about 55% (a big thank you to Jeff, the Scotch Hobbyist, for his ABV calculator iPhone app!))

To nose it was like sniffing a sugar fire or perhaps a small burning pile of spiced gum drops.  To taste it was a bit different.  Yes, it burned like all hell but it was so lip smacking and sweet; quite spicy too – made me pucker.  Like a delicious cinnamon bun sitting atop a burning stern-o can.  The finish was L.O.N.G. Long! But full of ripe bananas (flambe perhaps??) and sugared vanilla and oak.

OK, now I must go on with the 55%ABV review.  It’s just way too hot to drink without water (go ahead, call me chicken, I don’t care).

On the nose — Pipe tobacco and fresh grass, nutmeg, cinnamon and pizza spices (think oregano – so odd!), banana peel comes though, much easier to nose at this ABV.  I don’t want to stop nosing.  It’s both inspiring and imposing, pleasant and brash.

On the mouth — Still hot.  Much hotter than the nose.  The palate flavors are a near mirror image of what I got on the nose.  How cool is that!?  There’s an addition of some citrus notes though and the banana is more prominent here.

Finish — Lingering, all burny and stuff… lots of spice and the oregano comes back but it’s very sweet, not so savory.

In sum — Holy Frijoles!  This is some good stuff that makes you slap your leg and say wow!  This is such an American drink.  In your face and unapologetic.  If I could put a name or personality to this drink it would be Eminem.

This bourbon whiskey just doesn’t give a rat’s ass.  It is what it is.  If you like it, cool, then you get it and love it.  If it’s not up your alley, this whiskey will give you the finger and tell you to F### off.

Sorry for all the potty-words but, try this whiskey and you’ll see that you too will be swearing like the dickens and calling your mother names! (Mom, if you’re reading this, I never called you any bad names.  Promise.)

A special thanks goes out to JH for the sample!!

I will have two field trip posts going up with in the next two to three days!  One for Whisky Live NYC which I attended last week.  Another for a tour of a newer boutique whiskey distillery!!  Stay tuned!!