A couple of weeks ago I sent out a Facebook message on the Jewish Single Malt Whisky Society’s Facebook page that I would be in Chicago for a week or so (on one of my many business trips to Chi-Town) and had an evening, **maybe two**,  where I could do some whisky stuff.  Well, my two evenings turned into one and to my surprise, I had a few offers to hang out and dram with this person or that.  Sadly, I had to pick and choose only one of the offers and the only way I was able to make my one whisky night work was to select the one that would allow me to stay at my hotel.

My selection was Scott’s Selection.  Brian Dvoret, US ambassador for Scott’s Selection, and I have shared a few emails over the past year or so but have seemed to somehow miss one another at every go.  Luckily for me, it was not the case this time around.  What’s more was Brian said he was able to bring his wares right to my hotel – I didn’t have to make one bit of effort!  Brian really played to up my laziness (laziness, my ass!  I had been working a tradeshow for many days straight; 7am up to 10pm down Saturday to Thursday – I EARNED this whisky night!  Thanks again Brian – I could not have had this great experience without you!!).

So, what is Scott’s Selection and who is “Scott”?  While there’s more info on this website, here’ the gist:

Robert Scott has been immersed in the Scotch Whisky trade since he left school at the age of sixteen. Starting first as a lowly distillery worker responsible for cleaning the stills, he rose steadily through the ranks, gaining extensive knowledge of all aspects of the distilling trade. By the time he had reached bis 32nd birthday, not only had he gained an enviable reputation as an accomplished all-rounder in whisky production but, more importantly, he had become one of the most respected “nosers” of Scotch Whiskies.

In the 1970s Robert Scott was appointed Master Distiller, a position he held in the finest traditions of this ancient craft until retirement beckoned. Prior to caring full time for his garden in Glasgow, Robert was to be given one final assignment, namely to create a personal selection of his favorite single malt whiskies. Thus, Scott’s Selection was born.

Robert’s criteria for choosing his Selection is rigorous:

Scott’s Selection is a tribute to the great tradition of distilling whisky in Scotland and above all to the knowledge and expertise of Robert Scott, Master Distiller.

On to the tasting: 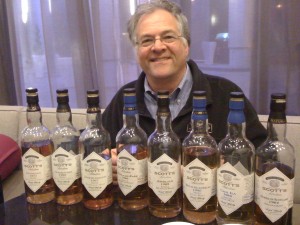 On top the the whiskies tasted that night (shown on the left with Brian, 9 in all; 8 Scott’s Selection and The Speyside 12yo) I was able to share this experience with my boss, Charlie. 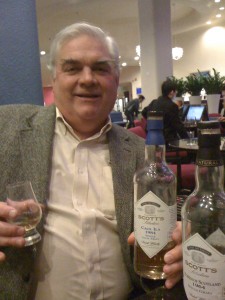 Charlie (shown to the right and happier than a whisky drinker at a private tasting), on top of being a great boss, is a sucker for a good whisky but has never really had the opportunity to have a private whisky tasting.  He worked the tradeshow right along with me and I thought that my whisky reward should be his whisky reward as well.

So, as I mentioned, Brian was nice enough to bring 9 different whiskies and while I didn’t take any notes on the whiskies I tasted, I can tell you that most were lovely single casks whiskies. Brian is a very knowledgeable guy who has been in the industry for years.  He did a great job teaching us about the Scott’s Selection range as well as the 12yo Speyside single malt.  How were the whiskies?  To be honest, they were some of the better single cask whiskies I’ve had with a couple that really stood out for me…

Brian – thanks so much for the private tasting!  Charlie, I’m glad you could join in – it was a pleasure having you in on the whisky fun!