Video interview with David Perkins of High West – Part II of II: wherein David continues to take us through his new whiskey “Campfire” (my review of Campfire can be found beneath the videos) we discuss peat, blending and he then gives us a virtual tour of High West’s Distillery and award winning restaurant.

You can see Part I of this interview here.

I think the above intro basically tells all.  I hope you enjoy the balance of this interview as much as I enjoyed interviewing David:

And now the fourth and final video:

And finally, my review of High West’s Campfire whiskey – a blend of Bourbon, Rye whiskey and peated Scotch whisky:

On the nose –  Spicy and bright nose. Hints of pine resin and toasted rye bread.  Brown spices and a touch of shoe leather.  Honey and chai.  Approachable/easy.  Joyful.

New charred-oak & subtle spice, jasmine & sandalwood.  Some citrus spice laced with just a hint of smoke as a backbone.

Given the name of the whiskey, not as much smoke on the nose as you’d expect.

On the mouth – Forceful attack with big spice upfront.  A nice mouthfeel.   Toast and blueberry jam (notes I love to find with heavier toasted barrels).

Nutmeg, cinnamon and some orange zest.  Floral with citrus spice, like a rye IPA.

Smoke all around the edges, like burning twigs mayhaps…

Wonderful toasty and vanilla spice (chai) on the sides of the tongue.

Finish – Long and spicy (with the spice staying toward the back of the tongue). 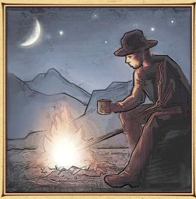 In sum — A warmer upper for sure.  This is a whiskey with a very “American” attitude however the addition of the Scotch whisky to the blend offers depth and dimension that many bourbons can’t provide.

Kudos to David Perkins for putting in some extra sweat equity in creating a truly different whisk(e)y experience.

Thanks, too, for the sample! 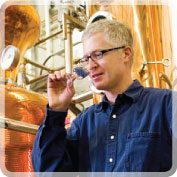 So… Somehow, someway, the Jewish Single Malt Whisky Society is in the final running for three separate, “2012 Drammie” awards!!

The Categories are we are in are:

As a whisk(e)y website & blogger, I must say that I am honored that you’d vote for me to be in the final running of the Drammies – thank you for your votes and I hope you’ll vote for me again in the second and final round – click here to vote now (remember, categories #6 & #8)!

As an Independent Bottling Company – being on the short for “Independent Whiskey Bottler of the Year” has us (Jason Johnstone-Yellin, Seth Klaskin and myself) elated, honored, pleased-as-punch, excited and confused that we’d be in the running seeing as we’ve not yet released our whisky!!  The others in the running have been around much longer than us so it would make far more sense that one of the four others claim that prize!

Please feel free to vote for us again in the final running for the 2012 Drammies (however, again, the four others may be more qualified to claim that prize) – click here to do so (remember, category #10).

We thank you for the votes and view your support as a compliment to: our company launch, our vision and marketing campaign.  Furthermore, the Jewish Single Malt Whisky Society receives your kind support as a challenge, too.  We have *a lot* to live up to and aim to please our members every step of the way.

The whiskies that we have chosen for our Summer 2012 release are nothing short of stunning.  Should you be interested in joining the Society and gain access to the whiskies we’ll be releasing, click here for information – we look forward to having you as a member! 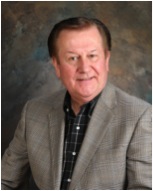 Finally, we are at the finish.

But before we got here, yesterday we discussed Glenmorangie’s Quinta Ruban and Nectar D’or (Port and Sauternes finishes, respectively) and the day before that we lead off talks of their “Extra-Matured” range with the Glenmorangie Lasanta which is a sherry finished whisky.

So what will we discuss in the end?  The first two of Glenmorangie’s Private Editions: Sonnalta PX, which is a Pedro Ximenez sherry finished whisky and the Finealta which is a replication, they think, of what Glenmorangie’s whisky might have tasted like back in the very early 1900’s and is lightly peated.

As with the others, the below videos are more than just tasting videos.  David Blackmore does a great job teaching us about the whiskies, process and more.

David, thank you very much for doing this series with me.  I look forward to our next shoot when we cover the Ardbeg line.

And thank you to all who’ve follow the series!  I hope you enjoy the videos below.  Cheers!

And now to video number two:

On the nose – Banana peels & cinnamon, Banana chips, candied oranges (strange, even orange Jujubees, sort of a soapy quality but good), The nose really reminds me of the palate on the Stranahan’s Colorado Whiskey with all of the yummy banana-i-ness to it.  A very un-Glenmorangie nose.  Wait, I sniffed after typing that and I take it back, notes from The Original Ten Years are popping through honey, apples.  It’s all hiding there waiting to sneak up on you!

On the mouth — Fantastic mouth feel!  Oh, G-d, that’s just so chewy…  Like salted taffy or caramel.  Nuts and root veggies, a touch of chocolate here (sort of like chocolate shavings if you’ve ever had them, a very different taste than a chunk of chocolate), wine soaked raisins.

Finish — Quite long.  Chocolate covered leather (oh, so slight with the leather quality), raisins and fresh fruits.  Huh, slight nutty oak after about 45 seconds or so.

On the nose –Big cherry presence on the nose along with something minty.  An earthy quality to it – fresh potting soil, new ferns.  The peat in here is very light.  Toffee & caramel.  Cadbury fruit & nut bar.  Some soy sauce.

Finish – Now quite tannic.  Quite long too.

You can view days 1, 2 and 3 of this video series, here, here and here (respectively).