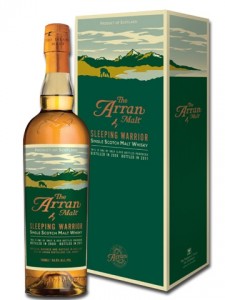 Day one of the Jewish Single Malt Whisky Society’s whisky tour will bring us to the Isle of Arran.  At only 15yrs, and as you might know, Arran is one of Scotland’s youngest distilleries.  Young as they are, the whiskies they’re releasing are top notch and they’re surely making a name for themselves.  A good, good name for themselves.

This whisky is limited and only 6,000 bottles were made available.  6,000 might sound like a lot of bottles but these releases really sell out quite fast.

According to Arran, “A donation from every bottle sold of The Sleeping Warrior will be made to The National Trust for Scotland to help maintain the footpaths on Goatfell, Arran’s highest peak, for the enjoyment of all.”

So, if you want to buy a new whisky and feel like you’re contributing to a good cause, this might be it.

On the nose –  Quite obvious, this is an Arran whisky as it’s got a good deal of salt and brine upfront.

Melting milk chocolate with something bitter in here as well (perhaps some bitter sweet dark cherries).

Walnuts and breakfast food gristle sitting in the edges on the frying pan.

Blood oranges and to top it off, malt and lots of it!

On the mouth – Tip-top mouthfeel!  Reminiscent of the mouthful I got on the 11yo, 15yr Arran Anniversary malt.

Nutty (let’s hope you don’t have any nut allergies!).

Finish – Milky cafe latte that warms you from head to toe on a cold late autumn of early winter night.

In sum – Perfect for colder days when your loved ones aren’t around for you to snuggle up with.  Love the one you’re with – love this Arran!  I have to say, this is perhaps my 2nd favorite Arran after that 11yo, 15yr Anniversary Arran I mentioned earlier.

Special thanks goes out to Andy Hogan for the sample!